The Luchnik-E Very Short Range Air Defence Missile System (VSHORAD MS) developed by KBM RPC, JSC together with SAZ JSC and GRPZ JSC is intended for protection of small-size assets and military units (including those on the march) from low-flying air threats by engaging them with 9M342 fire-and-forget missiles from the 9К338 Igla-S MANPADS in optical countermeasure and natural clutter environment, round-the-clock in an automatic mode of target detection and tracking. 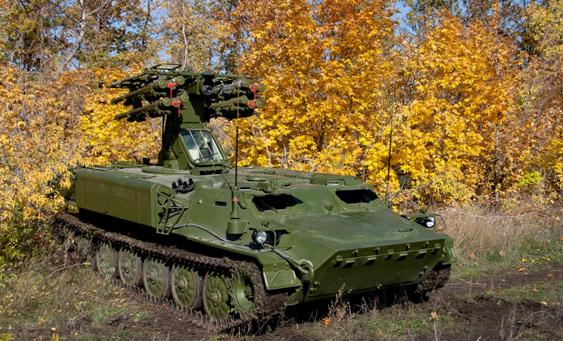 The system is capable of defeating advanced fixed - and rotary-wing tactical aircraft, cruise missiles, and unmanned aerial vehicles in the day- and night-time. The system can engage air threats while moving at up to 20km/h.

● high mobility, autonomous operation,  cross-country and amphibious capability, transportable by a helicopter as a sling lift, by air, railway, water, and semitrailers;

● highly concealed combat use due to employment of passive day and night surveillance and tracking means;

● possibility of both autonomous operation and as part of an air-defence unit (battery) under automated combat management from battery command posts such as 9S737MK Ranzhir-MK, PPRU-M1,  PU-12 etc.;

● either automatic cued or autonomous target search by scanning in the ordered sector of responsibility, manual/automatic target acquisition and tracking of up to 4 targets by the on-board electro-optical day-and-night station (EODNS);

● optional capability of shoulder-firing by two operators with launching mechanisms from the combat vehicle's organic equipment;

-AKYAT.00002  training set for training operators in target search, detection and lock-on, and in launching missiles;

-9M342-MAKET.000 size-and-weight dummy of the missile in launch tube for training operators in missile reloading on the CV;

-288.50.00. 000 set of size-and-weight dummies of the universal launch module for training operators in missile reloading on the CV.