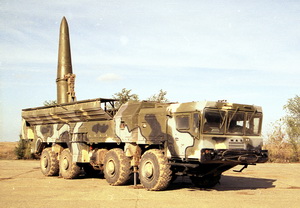 The Iskander-E high-precision missile system is intended for concealed preparation for and delivery of effective missile attacks on priority smalls-size and area targets in the operational depth of enemy formations.

- high-precision and effective destruction of various target types with penetration of ATBM defence;

- high probability of the missile's failure-free operation during prelaunch activities and in flight;

- high tactical manoeuvrability due to cross-country capability of combat vehicles based on all-wheel drive chassis;

- strategic mobility due to transportability of system vehicles by all means of transportation;

The Iskander-E missile system provides for accomplishment of combat missions in all modes of army combats, in various theartres of war, round the clock, in ATBM and electronic war environment. 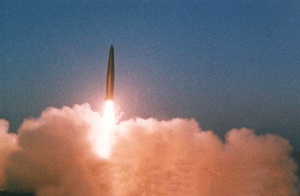 Functionally, the system can be devided in:

- crew life support vehicle for the personnel on the combat alert at the launch site; 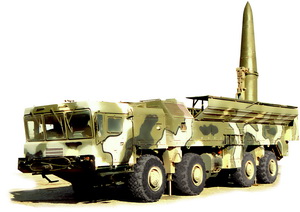 The missile system ensures combat operation with the launch site and target at an altitude of up to 3,000 m above sea level, the TEL taking either an open position or being positioned in an emplacement without survey and weather support and without engineering organization of the launch site.

High precision at a significant range, short readiness time (between 4 and 16 minutes depending on the system readiness state), powerful combat payload and high probability of ATMB penetration ensure that the system is capable to quickly defeat any target type by launching one missile or two in salvo.